You are here: Home / About / Blog / Community / The Bidjigal People

On the Lands of the Bidjigal

We pay respect to the local Traditional people of the Salt Pan Creek area, the Bidjigal (also known as Bediagal), a clan group of the coastal Dharug people of the Sydney region, who have lived here for over 60 000 years. Their land covers Salt Pan Creek, Revesby and the estuarine surrounds north of Georges River.

Here we see a glimpse into Aboriginal life before dispossession resulting from British occupation in 1788. The perennial fresh-water streams provided enough fish, eels, shellfish (oysters, mussels), fruits, vegetables, game (wallabies, possums, birds) and honey that allowed one to go fishing in the morning, hunting in the afternoon, and to ‘write’ poetry at night.

The appearance of the golden blossoms of the Coastal Myall wattle (seen on the right-hand side of the painting) indicated the start of the mullet and eel runs. The abundance of food at these

times would be a cause for communal celebrations with people from neighbouring ‘country’, gathering along the river to feast, sing and dance in ceremonies of age and gender.

Despite being pushed to the fringes by the encroaching new-comers, Aboriginal people continued to live here ‘on country’, engaging in seasonal labouring with the increasing numbers of industries that arose up to the 1930s. As the land was freehold it became a refuge for Aboriginal people from other places, escaping the Aboriginal Protection Board control and much of the early discussions about social change and political action arose from here.

Other poor working-class non-Aboriginal Australians and migrant-refugee families came to co-exist in this little paradise. A symbiotic, social enrichment of life.

Blown glass fabricated by Ben Edols 2020
The long-finned eel (Anguilla reinhardtii) is known in the local Dharug language as Burra and is an Australian native species found in the waterways all along the east coast, from Queensland to Tasmania.

Eels are totemic, and form part of the spiritual psyche of all east coastal Aboriginal people and their rivers. The eels’ significance is seen in the name of the city of Parramatta or Burramada in the Dharug language, translates as ‘the place where the eel lies down’- the place of the spirit of Burra the eel. Parramatta River along with the Cooks and Georges Rivers are several major rivers in the Sydney basin that form ‘migratory paths’ for the eels: where the freshwater creeks and rivers merge with the saltwater.

Revesby is located on the land of Bidjigal people, one of the many coastal Dharug clans. Salt Pan Creek is an entry point to the ocean where the adult eels start their epic migratory journey north, occurring sometime between January and April.

This migration is commonly known as the ‘running of the eels’.

The flowering of the Coastal Myall (Acacia Binervia) signalled the start of this event for the local Bidjigal. For the people living around the estuaries, it was a time of great feasting and clans travelled from far away to celebrate, conduct ceremony and share the eels.

Once fully matured, the eels make their way out of the freshwater creeks, dams and rivers along the length of the east coast.

Changes occur to adapt them to their new saltwater environment. Their eyes enlarge, their eye pigments change, their pectoral fins grow larger and they lay down fat reserves in readiness for their long ocean voyage.

They then swim downstream and amass, lying in wait for a full moon and high tide whereupon they enter the ocean, swimming thousands of kilometres to their northern spawning ground in the Coral Sea. There they breed, lay millions of eggs and then die.

Upon hatching, thousands of leaf-shaped, transparent larvae commonly known as ‘glass eels’ are then swept along by the currentsdown the coast.

The glass eels, upon entering the freshwater, feed on the micro-organisms from there, resulting in them taking on the colours of the river. They then move inland, back to the rivers of their forebears, to continue the circle of life.

The Dharug, along with other neighbouring nations hold stories of an Ancestral Creator in the form of an eel/serpent that at one time long ago, formed the rivers and mountains here. The eel is seen as an especially important nutrient for expectant mothers and for the ill and elderly and is held in high regard by Aboriginal people as a significant food source.
Leanne Tobin 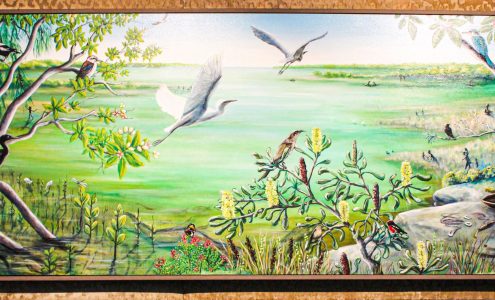 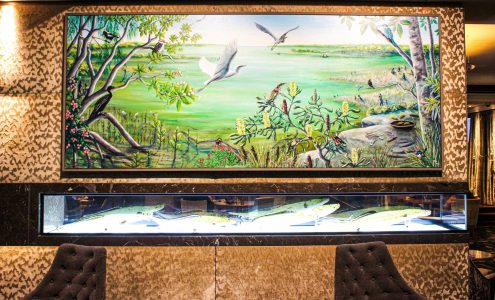 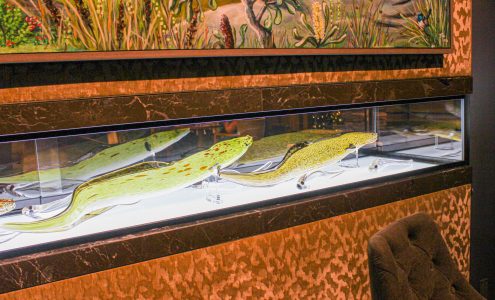 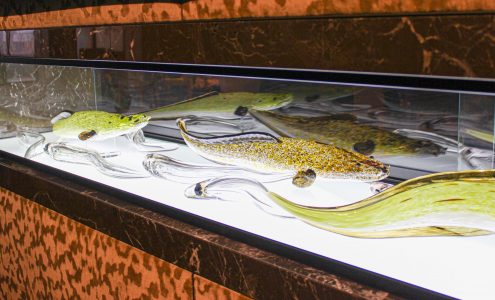